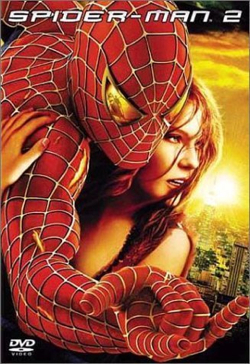 The second of the Tobey Maguire films starts off great, it's shows Peters human side where he's struggling with the mixed identities, trying to fit everything in and always disappointing someone. Even through this film is 8 years old I still get chills as spidey flys through manhattan, fantastic!

The film is quite obviously more polished then part one and Tobey is improved in his role as Spidey.

My favourite scene in the film is when Spidey is in an elevator with and a guy pops in, the scene captures the humour and awkwardness of the film perfectly.

Doctor Octavius is a formidable character who becomes even more-so after the initial incident. He's a believable villain, well in the context of the film anyway!

Overall, I loved this film it's awesome! 5/5